I wanted to reach out and let you know about a trip we are taking to Baja California, Mexico this fall that involves Grupo Cleofas and our vessel the Maria Cleofas.  On March 19th this year we were formally invited by the Mexican Government (see Maria Cleofas Vaquita Survey Invitation PDF) as well as NOAA Southwest Fisheries Science Center to assist in a 42 day expedition (starting September 27, 2015) in the Sea of Cortez with the NOAA research vessel Ocean Starr. The purpose of the expedition is to get an exact count on the last remaining Desert Porpoise (known as Vaquita), to film them in the wild, and assist in the ongoing international media campaign to save them. The Mexican government has, to date, invested over $30M to save these (the smallest porpoise on the planet) animals from extinction. Due to the shy nature of the animals and the fact that our vessel’s solar system allows us to sit silently, our role will be to capture photographic (and videographic) images of the Ocean Starr and their crew doing the actual field work in this heroic effort to save the Vaquita. In addition to filming, our crew will also be doing interviews with local biologists and fisherman. Photography aboard the Maria Cleofas will be done “in house” courtesy of my son Nicholas Alker who is a Brooks Institute Alumni and crewmember Francisco Gonzalez, who is also an accomplished underwater photographer.

I am not sure where you (or your company) stand on environmental issues such as these, but this is an extremely important project. Every individual involved totally believe that we can save this animal from extinction! Whether you are able to support it or not please feel free to circulate this page to whomever you feel appropriate.

Please scroll down and take the 8 minutes to watch the video…it is both informative and extremely compelling……VIVA VAQUITA!!!

The following were articles in the San Diego News on April 17, 2015 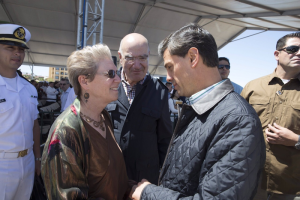 On Thursday, April 16 the President of Mexico Enrique Peña Nieto led a ceremony launching increased enforcement efforts in preparation for a 2-year ban on gillnets within the range of vaquita in the northern Gulf of California. The ceremony in San Felipe was attended by Anthony Wayne, the U.S. ambassador to Mexico as well as representatives of the U.S. Marine Mammal Commission and several NOAA fisheries representatives including Martina Sagapolu from NMFS enforcement and Barbara Taylor and Kristen Koch from the Southwest Fisheries Science Center. Barbara met briefly with President Pena and Secretary of the Environment Guerra (see photo).

Deployment of Passive Acoustic Devices in the Upper Gulf of California
Last week Barbara Taylor and Jay Barlow (SWFSC), Frances Gulland (U.S. Marine Mammal Commissioner) and Peter Thomas (U.S. Marine Mammal Commission) accompanied Armando Jaramillo (CONANP) to deploy passive acoustic recorders at the highest density sites for vaquita. They were unable to deploy at one of these high density sites because several gillnets were illegally set within in Refuge. Following reporting these infractions to the Department of the Environment, Taylor and Thomas were asked to attend a meeting to coordinate enforcement of the ban that was attended by all branches of enforcement within Mexico. Following the meeting, the infraction information was given to the Navy officer now responsible for enforcement. The visiting group also was given demonstrations of the alternative fishing gear under development and toured the processing plant where vaquita-friendly shrimp have recently been packaged. Contact Barbara.Taylor@noaa.gov for more information.

Thank you for taking the time to read this information and considering making a donation!

What is a Vaquita?

The vaquita is a small porpoise (whales, dolphins, and porpoises are called cetaceans by scientists). It is one of only seven species of true porpoises, and is the only one that occurs in warm waters of the eastern Pacific. It is found in a tiny area in the extreme northern Gulf of California, near Baja California, Mexico. It is a unique species, with a body shape and color pattern unlike that of any other. It has a tall dorsal fin (for a porpoise) and a beautiful color pattern on the face, with dark eye rings and lip patches that look like an application of “goth” make-up. There is only one small population, and if the species goes extinct, it will be gone forever.

Why should we be worried?

The vaquita has probably always been rare. But in the last few decades, the small population has plummeted by about 8-19%/year, as gillnets set for fish and shrimp kill more porpoises than are born. The population in 2014 was estimated to be only 97 individuals, and is declining quickly. If rapid progress is not made, the vaquita will be extinct in a few short years. The very perilous situation of the vaquita has been recognized by the IUCN (International Union for the Conservation of Nature, which lists it as Critically Endangered), the Mexican government, and the US government (both of which list the vaquita as Endangered).

Check out the video by the Vaquita Endangered Porpoise Science Documentary Project:

See the links below for additional information on the vaquita porpoise and efforts to save them from extinction.

Help Grupo Cleofas participate in the effort to study and preserve the Tres Marias archipelago!

Grupo Cleofas is a 501(c)(3) non-profit organization. Your donation is tax-deductible.